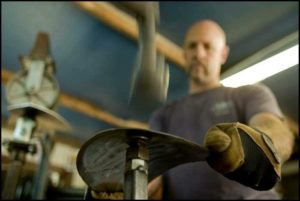 Have you ever wondered how you can have a strong connection with someone, that you’ve only met for the first time or how you can lose a friendship or bond with someone that you’ve known for years? Some would say it’s a simple matter of growing apart, others would say it’s a matter of never really knowing somebody until you find out what their true colors are. I know for myself, it’s a matter of someone’s values. Who they are, what they live for and what they would be willing to die for; that’s where my values lie and I still want to believe that’s what we look for in people.

I first met Fast Eddie at a car show about 12 years ago. If you’ve never been to a rat rod show or a motorcycle event, most of the people you meet are genuinely good people, but for an outsider, one might be intimidated by the tattoos, greasy hair and PBR’s being thrown back. Don’t get me wrong, if you were to look at me you’d probably think the same thing, and I’ve come to terms with that long ago. Anyway, I was at a car show with my 27 Model T, just sitting on the back, somewhat minding my own business, when a taller guy with a thick New York accent, cuffed jeans and a plain black shirt, and his young daughter in tow, came to check out my rat rod. He kind of looked like he could play an Irish gangster in a Scorsese film. Usually when someone at a car or bike show wants to talk about your car or bike, there’s two responses, one being “whatever dude, you’re not in the scene” or the second being the response of giving a college style lecture, on every detail of the build, until you bore the person into leaving. I usually chose to be cordial and try to explain the build without sounding like a know it all jerk; after all, I was one of those clueless kids at one point. Eddie and I talked about my car for a few minutes, but I couldn’t help but to notice there was a difference from Eddie and some of the other car guys; he was very humble and his young daughter was by his side the entire time. What was also evident was that his daughter was more important to him than any of these cars. Every once in a while, he would look at a car but his focus would always remain on his daughter. I guess after being teachers for so many years, I seldom see that sort of devotion anymore, that kind of love and focus. I would later come to find out that Eddie was one of the most prestigious fabricators in the country and an even better father.

It’s 6 years later, around 9 o’clock in the morning and I’m riding my bobber down to Eddie’s shop, which is close to downtown Albuquerque. It’s only a 15 minute ride from my house, but in early November, that means it’s a brisk morning, so the ride feels refreshing. As I pull into the shop, I’m still wondering why one of the best fabricators I’ve seen, would be willing to work with me, customizing my bike. At any other shop, I would be paying upwards of a couple hundred bucks, but with Eddie, it’s a few hours of your time to lend a hand with the build. As we work and talk, something tells me he gets it. He understands that there’s a few of us left, a few guys that enjoy working with their hands, and building something from nothing. It’s somewhat reminiscent of our grandfathers’ generation. Perhaps I’m more the nostalgic type but I’d like to think there was once a generation that took pride in their work and their families. A time when a man’s word was good for something. Even though I’ve only hung out with Eddie a few times, I can tell we share that same understanding. Over the next few hours of cutting metal, shaping, welding, and grinding, I have a custom seat pan and fender; all it cost me was a bit of my time and a little work.

Eddie makes metal working look effortless, like a master painter or sculptor working on a piece of artwork. The gears are turning in his head and he is relaxed the whole time. If I were to do this fab work on my own, I would’ve already punched the wall or thrown a tool. When we are all finished, it’s more than obvious that this man takes a lot of pride in his work, never skipping over the details, but more than that is the pride he has for his daughter, always throwing her in the conversation.

As we finish fabricating my seat, I’m dirty, smell like metal, and it feels rewarding. I give Eddie a firm handshake and offer a couple bucks that he doesn’t take. I proceed to throw on my gloves, helmet, and put on some old folk songs, to remind me of a time when music had soul. As I ride off, the sun is setting and my mind once again is wandering. To be honest, it’s a miracle I haven’t swerved off the rode as I daydream on my bike. I guess it’s relaxing for me, but I’m pondering why Eddie would be willing to help me and how many people are left like this in the world today, how many people are still alive, that work tirelessly day in day out, for their family and how many people can say they do it with pride. Again, I am also wondering, if I were given the opportunity, would I fill those shoes of our grandfathers or would I be another deadbeat father. I would like to think I would be a great dad; however, it’s probably for the best that it wasn’t in my cards. For Eddie, building is his job and raising his daughter is his life-long profession. For every piece of metal he shapes and for every custom part he makes, it is really a part that has been made for his daughter. I like to say any guy can make a child but it takes a real man to raise one. So thank you to all of my friends like Eddie, for being real men for your children.