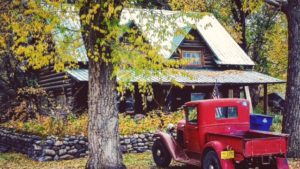 Caballos Salvajes
A few years ago in my master’s program at UNM, I was given an assignment regarding the dilemma of modern education. It took me awhile to pinpoint a specific direction since in reality there’s more of a reason for concern than celebration, but that’s for another story. So after a day of reflection on my own poor attempt as a young student, it hit me. Students need mentors, not just teachers, but real mentorship. After that insight, the paper came to me rather easily. To this day, it is still a strong methodology for my own teaching and students; in fact, I have a sign in front of my classroom door that reads “be who you needed when you were younger.” I am far from perfect and some days I’m not sure I am what my students need. To be honest, I often have my doubts I am anything but the stereotypical teacher, with full sleeve tattoos, a guitar in the classroom at all times and the occasional hot rod or motorcycle in my parking space. I wasn’t born into a family of educators and my past is anything but pristine. However, when those days of self-doubt hit, I at times can find solitude with my mentors that have helped and guided me on this crazy journey. One in particular is the wild cowboy and former educator that I am going exploring with today, Nick LaRue.

I met LaRue as a first year teacher with big green gills new to the profession. I needed someone to lean on and that someone was Nick and without him I’m not sure I would have made it very long as an educator. He has always been there to assure me that it’s ok if we do not look, act, or even come from the same background as these other teachers, and throughout the years he has been right. I’ve learned that those of us that have struggled and have had the most strenuous stories often make the best teachers and mentors. We understand what it’s like to be broken, to be poor and to have been written off. It’s what makes those few of us more real and passionate about our teaching. We live and teach like we are still at the bottom because our past will always be close behind us. 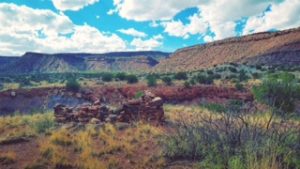 It is Monday morning, the first day of my winter break, and it is bone chilling outside. The sky,however, is a beautiful New Mexico blue and there’s still frost on the road. Nick and I are traveling east and in his normal driving fashion, he is careening through the lanes in his pickup like a wild stallion made into a racehorse. Nick is one of those characters that is seldom seen in the modern-day world, not quite made for this time and he is well aware of it. He looks somewhat like a cowboy version of Kramer from Seinfeld. He is tall and lanky and you will never see him without a cowboy hat, cowboy boots, or his knife.

He was born April 1, 1955, in Albuquerque, New Mexico, to a loving mother and the wild at heart father. His father was a consummate rebel that despised authority but was extremely intelligent. It is obvious now that Nick picked up many of his traits from his father, both good and bad. Despite his father’s intelligence, his father carried some issues from World War II, suffered from malaria and was blind in one eye, which would further his anger and distrust. Subsequently, Nick’s parents did not get along and when Nick was four his mother decided to leave his father unexpectedly. She took Nick and his two siblings on a Greyhound bus across the United States from Albuquerque to Cape Cod, finally staying with his great uncle in a creaky old Victorian house overlooking the North Atlantic. Nick would explain that it was like going back 100 years because there was no indoor plumbing other than a pump in the kitchen sink, and they would burn wood to stay warm.

His father throughout the years would always be on the hunt for his son, and one night as Nick was being watched by the babysitter as his mom was working, there was a knock at the door. Nick still remembers his dad pushing the babysitter to the side as he gathered up a few of Nick’s things and like the wind they split, not to see his mom again until he was 17. His dad and he moved back to Albuquerque for a short time and make their way down to Casas Grandes Mexico, which is about 150 miles south of the New Mexico border. They lived in a small Mormon colony and in the meantime his mom hired a private detective to look for them. Nick’s dad after a short time did not want to become Mormon and thought it to be rigid with too many rules so again they traveled back north to Tucson, Arizona, Las Cruces, New Mexico, and eventually the valley of El Paso.

Nick remembers his father as being real slick and was able to manipulate the system to avoid any sort of registration, cops or detectives. They always lived on the outside of society never getting too close to anyone or anything. As the years would go by, Nick would always long for his mother and at the age of 17 he grabbed his backpack and traveled to Albuquerque to reunite with his mom.

Spending about two weeks in Albuquerque with his grandparents and mother as he would soon find out that their strict ways conflicted with his wild roots. So again he packed up and hitchhiked to Telluride, Colorado,which at the time was a little mountain town. He stayed at a hippy commune and when there was no work, he often poached deer off the side of the road. After a year of that lifestyle again he gathered his pack and made his way to Austin, Texas,where he would squat in an area he referred to as Peace Park. He would make jewelry necklaces, bracelets, and little roach clips in order to earn enough money for a meal.

He met a beautiful little street musician from El Paso and again he would pack up and head on the road with her. She made a few dollars playing the mandolin and acoustic guitar in juke joints in and out of downtown El Paso. Nick would get by running a greasy spoon restaurant and after a few years of that minimal existence, they would take a chance for a easier life in Albuquerque, only this time he would have a daughter and a wife. Like most couples that move and struggle financially,they divorced and he received joint custody of his daughter.

Nick went back to being a bachelor for a couple years but now he couldn’t run, as he had a little girl to take care of. He would, however, meet the first love of his life, Carol LaRue, and she would be the motherly nurturer that he had longed for since he was taken from his own mother. Carol straightened him out and helped him raise his daughter while he worked as a handyman. In order to get by, he tookon any kind of job from roofing, tree cutting, to stucco; as he would jokingly say, “with a little plaster and paint, turn it into what it ain’t.” He and Carol married and had a boy they named Jake. He would still work odd jobs from restaurants to fighting wild fires but nothing would ever really stick as he still yearned for adventure.

As fate would have it, one day he would quench that thirst as Carol casually asked Nick why he didn’t use his head for once and get a degree. The only problem was that at this point Nick was older and he did not have much experience with formal education. Nonetheless, he took a chance and excelled at UNM. graduating with honors. He quickly landed a job teaching 6th grade biology at Garfield Middle School in the North Valley. He also taught summer school for a few extra dollars. When he overheard that there would be a teaching position opening up for New Mexico history at Madison Middle School, he jumped at the chance. Being a diehard New Mexican, this would finally afford him the opportunity to share his passion and love for New Mexico. Like all good, passionate educators, the system eventually wore him down to retirement.

Having known Nick for a few years, I was certain after his retirement that his need for adventure would get the best of him, and shortly after he came up with an idea to be a tour guide and start his own little business. He called it Back Road Wrangler, and with a library of knowledge and his 4 x 4 Tacoma, he would take tourists and nuclear families into the back country of New Mexico. His adventures would range from Indian ruins to ghost towns and would allow him to share his passion of New Mexico on his own terms free from rules and bureaucracy.

Nick would often tell me and many others “if you really want to see New Mexico, get the hell out of Albuquerque, get out of the Rio Grande corridor because the real New Mexico is out there.It’s out there on the llanos to the east or the mountains to the west, along the back roads where people still live like they have for hundreds of years. New Mexico really is a history of just layers and layers of time, natural time geologic time, and then human time, and I don’t think people really understand the tremendous diversity that New Mexico offers.” 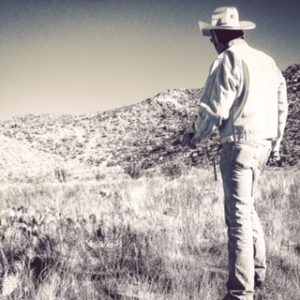 To this day, I often contemplate his words. “Go now because it’s slipping away.” And he is right; just like the land, our lives are fleeting and far too short. I’ve learned that, like Nick, I too have found a way to fill that empty whole in my heart caused by the longing for family and a reckless past. I believe we both have at times come to terms with who we are and the good and bad times that has shaped us. We will never fit into the walls of society, but that is what makes us honest teachers. We teach with a fiery passion because we are well aware of our past and what we have had to fight through to get here. So on days like this, when I have some spare time, I can call on my amigo Nick to show me a hidden ruin or a ghost town; and thanks to him, I have been fortunate enough to see parts of New Mexico that most eyes will never get a chance to see and share a good conversation with a wild horse.