There is a current romanticism of the wandering spirit, the call of the wild – you can see it plastered today on social media . The embellishment of being a gypsy is not just a trend invoked from authors such as John Krakauer or even further, Jack Kerouac and his tales from the road. There is in each of us a spirit to venture out and discover the unknown, a drive to find that greener pasture. That search for a better life, a life traveled off the beaten path into the unknown is what made those early pioneers take a leap of faith and roll that dice. Today, however, this adventurist spirit is a completely different story and there is no longer the “do or die” consequences of survival no matter the cost. Nonetheless, as many of us sit behind a steering wheel in traffic or log in countless hours on a computer screen, that spirit of adventure is still yearning within each and every one of us.  When I think of a wild adventurist and perhaps that gypsy, no other person comes to mind more than my own “abuelita” or granny,  Anita. Her story is one that could make a great novel, or perhaps a movie, and although I would love to tell that story there are not enough pages for her all her epic tales as her story is one of adventure, courage and heartbreak. After my own precarious father disappeared around the age of nine, my grandmother Anita would be there to pick up those broken pieces as we would often take road trips together throughout California and the southwest.
It’s almost 30 years later, just the two of us on I-40, traveling the desert roads to California. 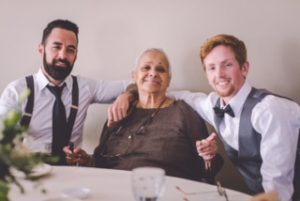 This time I am no longer a little boy and my abuela is now an old woman.  As I gaze over at this woman that helped raise me I can still see her spirit, and I feel only pure admiration for her and contemplate the long road of her life.  My abuelita was born in 1933 in the small farming town of Reedley, California just outside of Fresno. She was the middle child of five brothers and sisters that all lived in a small one-bedroom ranch house with no hot water or plumbing. Her mother and father were hard-working grape farmers from Mexico that had come to the United States for a better life. It was obvious that Anita would never settle for the meager ranch life for there was a free spirit within her that could not be captured or caged. In fact to this day, while the majority of my family has often made comments on how I should now be settled down with a family of my own, it is my grandma that has always come to my defense. It is obvious that the same adventurous spirit burns inside me; thus my desire to travel, see the unknown and motorcycle the desolate roads. 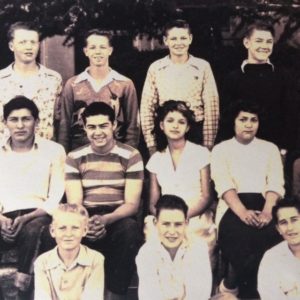 Growing up as a poor Hispanic, Anita and her family did not have much but always seemed to make the best of what they did have. She recalls some of her fondest memories are of her  childhood swimming in the arroyos in the summer and playing in the streets with her brothers until the sun went down. In her freshman year of high school she decided to drop out and take care of the ranch, and at the age of 16 she met her first husband – a half Mexican and Japanese truck driver and they soon had their first child a year later. To get by she packed fruit crates, which was a common profession at the time for poor Hispanics in Northern California, and this is how she raised her first child. She would soon have another son and daughter, thus making her situation even more difficult.  Regardless of any circumstance thrown her way she would still make sure her three children would have nice ironed clothes and polished shoes.
After three short years Anita and her husband divorced and a few years later, she met another gentleman who was an aspiring young actor and together they had a daughter.  This would not last long and the actor soon left, selfishly leaving Anita alone with four kids to raise on her own. She recalls that even though they were dirt poor, she always managed to show her children all the beauty that nature had to offer. She would pack her four kids into her Austin-Healy during the weekends and head toward the beaches of Morrow Bay or the mountains of the Sierra Nevadas.  That gypsy spirit always burned and she made sure to never let anyone or anything distinguish it. 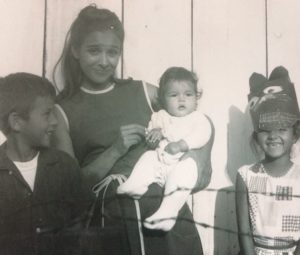 It was at this time that Anita decided to take what little she had and hit the road with her four children to the small beach town of Santa Cruz. She had met a man named Earl whom she reluctantly married, and recalls almost running out of the ceremony a few hours before it started but had second thoughts due to her four children. After a year of marriage, they found a small house in the mountains for seventy-five dollars a month. It was at this point that her life would take an extreme turn, and she made a decision she felt was best for her family and their survival at the time.
For the next three years as the late 60’s were in full swing, a surplus of money came swiftly crashing in like an ocean’s tide, as my abuelita Anita was introduced to making mescaline, a hallucinogen obtained from the small, spineless cactus Peyote. She and Earl also began selling Marijuana in her basement as Earl had some connections and had set the course in motion before she had any idea of what was about to come. One day, Anita, Earl and the kids took a trip to Mazatlán, Mexico, as Earl and a few of his associates already had already decided Anita would become an interpreter between the Mexican farmers growing pot and Earl’s associates. 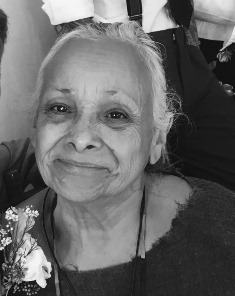 In less than a year Earl had become irrelevant and envious as his position would no longer be needed. So one day without saying a word he packed up and left for California with all of their savings. But Anita continued to interpret and play her part within the company as it had always been. As the winter season approached the industry was at a standstill and Anita, unaware of her next step, decided to take her four kids back to California. Penniless and desperate, the company let her stay at a small stash house in Placerville without running water, electricity, or heat and there she made small turquoise necklaces to get by. When the chance finally arose to send one of her sons, Gary, to Santa Cruz and her daughter, Jennifer, to Lake Tahoe, she sent them on their way for a better opportunity. Her eldest boy, Sam, had already joined the Marines, finding his own escape to a better life.
As the growing season soon approached, the company would again need her services and move her with her two remaining kids back to Aptos, just outside of Santa Cruz. The company paid her a visit, offering the same position as an interpreter, only this time her role and position had grown. She now was entrusted with delivering money from the states to the cartel in Mexico along with supervising shipments. The company provided her with a house and drivers in Tijuana. At this point in her life, her son Gary was married and old enough to take care of his younger brother and sister, while Anita was away in Mexico.
After four years of solid service and the gaining of a strong reputation, she was given her own crew. Earl, discovering her success, would weasel his way back into their lives and envious as always he had already made plans behind her back. This time he had involved Anita’s son Gary  to move product, which would set Gary’s criminal course in motion and at just twenty-one years of age he would  start picking up and delivering shipments from Mexico.
The money at this point was flowing enough to afford her a nice house in the hills of Santa Cruz next to the musician Santana, a 912 Porsche, and a DC3 plane to pursue her own interest when times were slow. Her family and crew had become extremely tight-knit, often working together and enjoying the good times. However, just as things were starting to look up, there were complications from within the company as some of the partners’ greed and drug addiction had started to take its toll. Along with the stress of being involved with a criminal business came the toll of an abusive marriage to Earl and she simply got tired of the lifestyle.  Anita would file for divorce and take her youngest children John and Dina to Hawaii to escape. After a year, she would get island fever and move back to the mainland, all the while Earl continued to harass and abuse her. Reluctant to go to the authorities and get the company involved, and her daughter Dina old enough to care for herself,  Anita loaded her youngest son, a few things, and set out upon the open road. She had once driven through the southwest and had fallen in love with a quaint town called Taos in the state of New Mexico.  It was just what she needed, a small place that she could become irrelevant in. 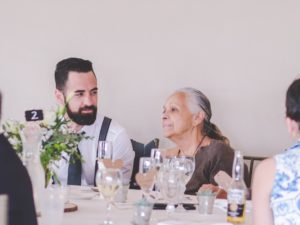 I am alone on this quiet open road headed back to New Mexico.
My abuelita, fittingly, wanted to stay in California for a while and do what she’s always done -travel some more. There is a certain sadness that comes with this drive and a realization is starting to dawn on me – our adventures together have come to an end.  My beloved grandmother is now approaching the age of eighty-four and once her flame burns out there will never be another soul like hers. All the stories, and adventures she’s experienced can never be duplicated. But for those of us that were fortunate enough to experience her free spirit and tenacity – we truly understand what it means to possess such an adventurous soul, and we know that no tales like hers will ever again be told.