Purpose in Stones
Finding your calling or purpose is by far the most difficult task in a person’s life or at least it has been for me. For Brenda she has found her place like a perfectly set stone. It also seems that to the rest of us at times she like many others have reached a certain level of sublime. When these people are working at their craft it also seems that all time is forgotten and there is an infectious manifestation or a sense of flow that comes from within. To reach this stage is no easy task and it is achieved through endless hours of study, practice, sacrifice and a bit of timing. 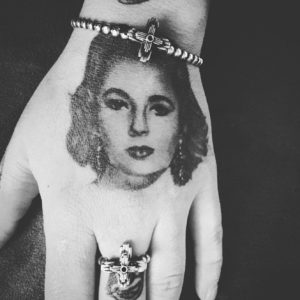 You may have seen some of Brenda Baca’s amazing turquoise jewelry throughout the southwest. If you’ve seen one of her pieces it’s obvious that she has an appreciation for the art form and its antiquity. Like myself, Brenda is a passionate person with an appreciation for our past, culture and customs and it is that constant appreciation that has illuminated her path. For her, making turquoise jewelry is more than just making a dollar; it is her therapy and her passion. She has studied the history of  turquoise jewelry and the history of our land here in the southwest. Jewelry making and turquoise is her heart beat that is connected to this earth and her art gracefully flows from her like it did from our ancestors of the past.

I am riding my bike down the treacherous streets of Central Albuquerque on this Wednesday morning trying to make it to a coffee shop in one piece. Central is a wreck, but the sky, as always is clear blue, which reminds me of the beauty of our land. This morning for some reason, I am in reminisce of a poem by Simon Ortiz titled Serenity in Stones. I read this poem my sophomore year of college and thought I understood it clearly, but now as I am getting ready to have coffee with Brenda and talk about her jewelry, his poem will become that more rich.

Brenda is one of those women that has a smile larger than the sun; she also has an endearing personality. The sort that reminds anyone of their mum. Her personality is also matched by her generosity as she is one of those people that would buy a homeless person a meal just to sit with them and enjoy their company. There is also another side to Brenda though. She is beyond driven to be one of the best role models she can be for her two boys. 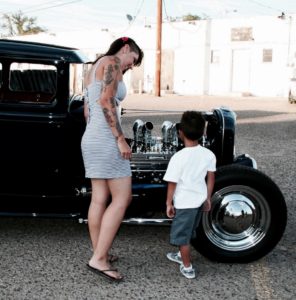 Brenda  comes from humble beginnings; she was born in the small town of Clovis, New Mexico, as she jokingly mentions “people are into sports, religion or drugs.” At the age of five, her mother decided to pack everything they owned into their car and move to Albuquerque for new opportunities. This would be a very humbling experience for Brenda as they often moved from apartment complex to complex, living on a meager budget.  Every summer she often returned to Clovis every summer to spend her days as a tomboy playing baseball, riding bikes and enjoying the small town life with her cousins until dark.

Like most teenagers she tested her boundaries but never managed to get in any real trouble. After graduating high school in Albuquerque, as fate would have it, her mother nudged her into auditioning for a modeling gig with one of the most prominent jewelry companies in the nation, Sunwest Jewelry. The owner, Ernie Montoya, also known as “The Turquoise King”, noticed that Brenda had the right look and personality for something larger. She was hired to work the sales floor at the young age of 20. With little background knowledge, she applied herself diligently to study and picked the minds of those that had been in the business much longer; she had to quickly learn every aspect of the profession. She applied herself and within a year she quickly learned every aspect of the sales position. One of the most important lessons passed down from her mentor Ernie, was that handmade jewelry is much more personal for both fabricator and the customer . It was simply not good enough to understand the method and the materials in the process but, more importantly, the artist’s vision.

Brenda had a firm grasp on the profession after four years of handwork and two young boys she was completely devoted to, her hunger to learn more was still burning strong. One day while playing with her youngest son, she realized that in order to be a strong female role model for her boys she would need to take a leap of faith and be an example of courage. She accepted an apprenticeship and worked with a fellow employee Molly McGrain from Sunwest Jewelry. Every day for an hour before work, at lunch and at times after work Brenda immersed herself in the art of a silversmithing, bezeling, stone cutting and as always learning its history. Brenda mentioned, Molly had a strong personality and would only explain things once. Fortunately being a quick learner, within four months she had grasped the craft and in addition to invested in her own tools and workbench. She now could practice and design from home. Brenda had also taken on the task of designing for Sunwest Jewlery which in turn  further sparked her creative side. 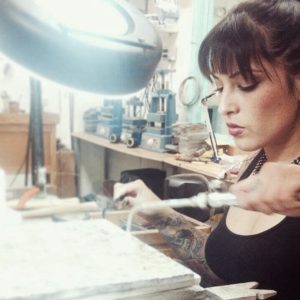 In 2015 Brenda was given the opportunity to work for a home shopping network which required her to travel to Minnesota every other month to talk on live TV about southwestern jewelry, which she admits is still shocking.  Around that time she would also take another leap of faith and decide to make and market her own jewelry. She thoughtfully named her business Ooeycucuy as a play on Hispanic roots. Each of her pieces is based on her sense of feeling and emotion almost like she wears her jewelry on her sleeve. You can look at one of her pieces and see exactly what she was feeling at that time. Her pieces can range from dark and punk rock to girly and southwestern. She is currently working on her own website and hopes to open her own boutique. Given that there is no end to her tenacity, there’s no doubt her dreams will not come to fruition. Her  one of a kind handmade jewelry has reached customers from California to New York and will soon expand beyond U.S borders. 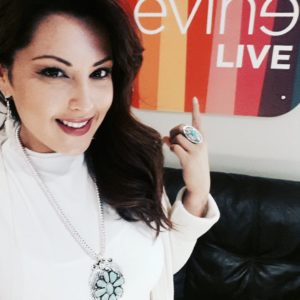 Brenda’s drive and pure determination obviously comes from deep within. She is a positive role model for her two boys. As both of them see her hard work and creativity she is their beacon of hope, they too will learn the same values that have made her successful and happy here in New Mexico. For example she prefers the sell her pieces at some of the smaller events around the city that have more of a local feel. For her Albuquerque has a strong artist community which has always supported her and has felt like a family somewhat competitive but also supportive. She also continues to run several homeless drives during the year and prefers to stay humble rather than egotistical, making her one of the most generous souls, I have ever met.

As we wrap up our coffee and interview and say our goodbyes, she she wears a giant sunbeam of a smile and I am happy knowing that we still have amazing mothers and entrepreneurs like her. I decide to take the long, quiet ride home and Carlos’s poem is still on my mind.

The serenity in stones
I am holding this turquoise
In my hands.
My hands hold the sky
Wrought in this little stone.
There is a cloud
at the furthest boundary.
The world is somewhere underneath.
I turn the stone, and there is more sky.
This is the serenity possible in stones,
The place of a feeling to which one belongs.
I am happy as I hold this sky
In my hands, in my eyes, and in myself.

Brenda is a part of the southwest and has devoted much of her life to this turquoise stone that has encompassed everything she holds dear, her boys, her community, and the blue skies that is Mother Earth. Her place is set in stone.